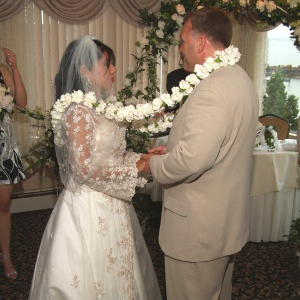 This delightful addition of “Two Souls United in the ‘Lasso’ of Everlasting Love comes from hispanic cultures but is certainly adaptable anywhere.

Lasso or rope is placed around the bride and groom’s shoulders (groom’s shoulder’s first) in the form of an “8” (the infinity symbol) – after they have exchanged their vows – to symbolize their everlasting union. This is usually done by the officiant, however, family members can also take part in this ritual. The couple wears the lasso throughout the remainder of the service.

It is sometimes made of rosary beads, white ribbon, orange flowers, fabric, silver, crystal or elaborately painted wood. It can also be placed around the couple’s necks, or wrists. If you have children; they may also be included as they will definitely be a part of the new family.

After the prayer and before either attempts to rise, at the end of the ceremony, the lasso is removed by the same people who put it on and given to the bride as a memento of her becoming the mistress of the groom’s heart and home.

The Bride and Groom kneel before the minister.

Minister: N. and N. have chosen to incorporate the Lasso ritual into their wedding ceremony today. The Lasso is a wedding ritual in which the couple are bound together with a ceremonial rosary. Lassoing is a declaration of intent, where the bride and groom clearly state that they are marrying of their own free will.

N., N., since your lives have crossed in this life, you have formed eternal and sacred bonds. As you enter this state of matrimony you should strive to make real the ideals that to you, give meaning to this ceremony and to the institution of marriage.

With full awareness, know that within this Lasso you are not only declaring your intent to be bound together before your friends and family, but you speak that intent also to God.

The promises made today and the ties that are bound here greatly strengthen your union and will cross the years and lives of each soul’s growth.

N., N., I ask you to hold hands and look into each others eyes.

Will you honor and respect one another, and seek to never break that honor?

Will you share each other’s pain and seek to ease it?

Will you share the burdens of each so that your spirits may grow in this union?

Will you share each other’s laughter, and look for the brightness in life and the positive in each other?

Minister or parents drape(s) the Lasso in the form of an “8” around the shoulders of the Bride and Groom.

Minister: N., N., as you are bound together now, so too your lives and spirits are joined in a union of everlasting love and trust. Above you are the stars and below you is the earth. Like the stars your love should be a constant source of light, and like the earth, a firm foundation from which to grow.

Minister offers a prayer, removes the Lasso before the Bride and Groom rise, then presents the Lasso to the Groom who will later give it to the Bride. (The Bride will carry her bouquet as they walk together down the aisle).

Bless the marriage of N. and N., O God, as they begin their journey down the road of life together. We know not what lies ahead for the road has many turns and bends. We are grateful to you for helping them to make the best of whatever comes their way.

We are thankful that they can continue to enjoy each other as they did when they first met and for helping them to realize that nothing nor no one is perfect and to look for the good in all things and all people including themselves.

Thank you for helping them to respect each other’s likes and dislikes, opinions and beliefs, hopes and dreams and fears even though they may not always understand them.

Thank you for helping them to learn from each other and to help each other to grow mentally, emotionally, and spiritually.

Thank you for helping them to realize that no matter what happens to them they will hold on to each other and know that things have a way of working out for the good.

Thank you for helping them to create for their children a peaceful, stable home of love as a foundation on which they can build their lives.

But most of all, dear God, thank you for helping them to keep lit the flame of love’ that they now share so that by their loving example they may pass on the light of love to their children and to their children’s children forever and ever.

O God in heaven, You ordained marriage for your children, and You gave us love. We present to You N. and N., who come this day to be married. May the covenant of love they make be blessed with true devotion and spiritual commitment.

We thank you for giving them the strength and courage to keep the covenant they have made.

Thank you for helping them to create for their children a peaceful, stable home of love as a foundation on which they can build their lives.

When selfishness shows itself, grant generosity;

When mistrust is a temptation, give moral strength;

When there is misunderstanding, give patience and gentleness;

When suffering becomes a part of their lives, give them a strong faith and an abiding love.