The breaking of glass at the end of the wedding comes from Jewish tradition and harks back to the destruction of the Second Temple in Jerusalem at 70 CE. As the story goes, A father hosted a wedding feast for his son and during the course of the event noticed that the rabbis appeared exceedingly joyful. In response he took an expensive wine goblet and smashed it to remind the participants that even in the midst of joy, life is tempered with sadness. Through the centuries a number of different interpretations have given a variety of meanings to the practice.

Minister: As we complete this joyous event, we come to a tradition that routinely concludes Jewish weddings. The breaking of the glass symbolizes the destruction of the Temple in Jerusalem as a reminder that even in the midst of joy, we cannot escape sadness. Through the generations the practice has come into use by other traditions as well along with many stories explaining its significance. For us today, it serves to remind of several important aspects of a marriage. The bride and groom and everyone should consider these marriage vows as an irrevocable act, just as permanent and final as the breaking of this glass is unchangeable.

The shattered glass also reminds us how fragile life and love can be. Sometimes a single thoughtless act can damage a marriage in ways that are very difficult to undo, just as it would be difficult to undo the breaking of the glass. It serves as a reminder of the sanctity of marriage, and that the love of the bride and groom should last for as long as it would take to make the glass perfectly whole again. It also symbolizes the transforming experience that marriage creates, leaving the bride and groom forever changed. In a moment, (Groom) will break the glass signifying the end of the ceremony and the time for celebration. Tradition suggests that as he does, all of us join in offering our best wishes for the future with the hearty Hebrew affirmation MAZEL TOV – literally Good Fortune or simply Congratulations. Are you ready? 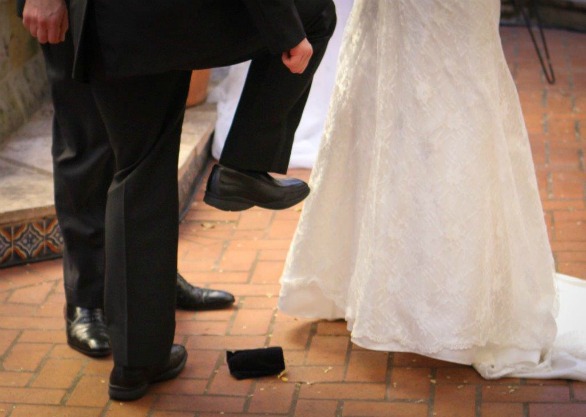 Officiant places covered glass on the floor.  After the couple is declared to be husband and wife and the groom kisses the bride, the groom steps on the glass with his right foot.

The minister officially introduces the new couple as Mr. & Mrs.